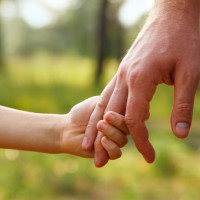 I asked my stepdaughter, Kaitlyn, what makes her relationship with her dad so special.  Her response, as she rolled her eyes and gave me the you-wouldn’t-understand look was, “I talk with words and listen with my ears.  My Daddy talks with signs and listens with his eyes.”  My husband, Chance, lost his hearing at 13 months old.  To this day, there has been no medical explanation as to why, but he would not change a thing.  Then, when Kaitlyn was born ten years ago, he was surprised to learn that his daughter would be hearing.  I get to be a part of this duo and see how important communication is in bonding.  The relationship between Kaitlyn and Chance is different from those I have seen so far at work – it is a bond between a deaf parent and a hearing child.

Chance grew up in a hearing family that took the time to learn sign language, and he attended North Carolina School for the Deaf in Morganton, North Carolina.  He started boarding at school in the 3rd grade.  He was surrounded by friends and peers who were deaf or hard of hearing during the week and was at home with his hearing family on the weekends.  From his own experience, and knowing that he and his hearing mother sometimes struggled to understand each other, Chance had a vision for his relationship with Kaitlyn – he intended to bridge their potential communication gap.

As early interventionists, we need to ensure that we are supporting parents appropriately.  My experiences with Chance and his daughter have given me great insight into the importance of understanding both the concerns and the priorities of parents, and we do this through the assessment process and building relationships with families.  As a deaf parent of a hearing child, Chance shared that it was important to him that people take the time to learn more about their unique situation, as most people are not exposed to the Deaf culture, at least not on a regular basis.  He was concerned that Kaitlyn would not be able to communicate effectively with her parents or the hearing world, and he also wanted her to be involved in the Deaf community.  At four months of age, Kaitlyn began using signs to communicate with her parents and is now fluent American Sign Language (ASL).  Although Chance had some initial concerns about her spoken vocabulary and communication, he relied on his relatives and other hearing people around him to support Kaitlyn in her verbal language development.

Working in Early Intervention, we believe that parents and caregivers know their child best.  Imagine though, that you are unable to distinguish among your infant’s I’m hungry cry, the I need to be changed cry, or the I’m sleepy cry.  Many of us have experienced interpreting babies’ cries in order to meet their needs.  But what if you weren’t able to hear the difference?  Chance was unable to decipher Kaitlyn’s cries, and his first instinct was to feed her.  If that didn’t soothe her, he would go through a checklist to try and meet the immediate need.  Did she need changing?  Was she tired?  Or did she just want to be held?  Many people who are deaf or hard of hearing are able to read facial expressions and body language well.  During those times when Chance was unable to understand Kaitlyn, he relied heavily on nonverbal cues to meet her needs.  For example, the I’m hungry cry started with a sour face and ended with open-mouthed crying.  Even now, I am in awe of Chance’s ability to decode Kaitlyn’s facial expressions and other nonverbal communication, including her eye rolling!  He has mastered the skill of reading and reacting to her nonverbal cues, whether she likes it or not.

Early Intervention professionals work with so many different families from so many different backgrounds, but the Deaf culture is one most people don’t know a lot about.  I have been fortunate to be a part of this dynamic relationship between a deaf parent and a hearing child, and I have learned that communication comes in many forms.  There is a noted strength in Chance’s strong desire to communicate with Kaitlyn, and the support he received from his family helped create an unbreakable bond between them, fulfilling the vision he had for a good relationship with his newborn daughter.  They say it takes a village to raise a child, or in this case an extended family!  As early interventionists, taking the time to learn about what’s important to families and allowing them to show us their resources, strengths, and abilities will make a huge difference in how well we support their concerns and priorities.  It may look like just a communication need on the surface, but it’s really the development of that special bond between a parent and a child that we’re fostering in the work we do, eye rolling and all, and it shouldn’t be overlooked just because it’s different.

A Tale of Two Coaches
Just What the Doctor Ordered

7 Responses to “I talk with words and listen with my ears. My Daddy talks with signs and listens with his eyes.”