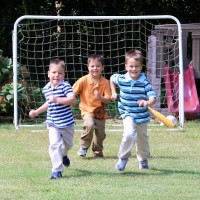 Six years ago, I gave birth to triplet boys at 24 weeks, 0 days gestation.  Each weighed only 1 lb. 6 oz.  Two of the boys left the NICU after 100 days, and the third came home after 180 days with a trach and a home-health nurse.

When they were released from the NICU, we had relative confidence about their medical stability (despite the trach), but uncertainties about their long-term developmental outcomes.  We knew that, while many things were out of our control, the one thing that we could do for them was Early Intervention.

The boys began therapies when they were between 3-6 months old (adjusted), and at some point during the following 6 years, they were involved in a varying combination of OT, speech, PT and play therapies.  This fall (after doing a Pre-K year at preschool), the boys began kindergarten, and we are finally done with therapies.  They are at the top of their class – reading well above their grade level and developmental-delay free.  I am confident EI is the reason for this.

For the first 3 years of the boys’ lives, therapists were in and out of our house multiple times a week.  As a parent who “lived” EI for a long time, here are some tips for making early intervention services the most productive and comfortable for the families involved.

–  Therapists as “Monitors”:  Every parent worries about whether their child will meet their developmental milestones.   Our children were so far behind developmentally from the outset that I really had no way to know when they should be doing what.   And on top of that, we were told that one of our kids was at a higher risk for developing CP, though nothing was certain.  For me, the early intervention providers played a crucial role in giving me confidence that if the boys were exhibiting developmental issues, they would be caught, and if the kids showed any sign of problems outside of the EI scope, the therapists would advise medical attention at the appropriate time.   In a sense, this gave me one less thing to worry about, and so I could focus my energy on working with the boys between sessions.

– Teach the Caregiver:  My children began EI before they were rolling over, and because babies are fickle, many of the sessions did not go as planned.   And so, early on, I realized the importance of the therapists teaching me the activities and how to work with my kids – as I was the one who would be continuing the activities between intervention sessions.   I found it helpful when the therapists demonstrated and had me practice the strategies.   Simple observation by parents is often not enough.   Caregivers need confidence that they are working with the children correctly between sessions.

– Caregivers are Busy and Forgetful!  Leave Reminders:  Visual reminders can be helpful for caregivers, particularly in the case of families dealing with multiple therapists.   Often I’d swear I would remember what the therapist said to do, and then hours later I’d have complete amnesia.  Plus, there is some accountability when things are written down.

– Incorporate therapies within the family’s routine:  I found that we were most likely to actually incorporate activities between sessions when the strategies fit within our family’s routines.  This was also often the only way to realistically fit therapies into our schedules.

– Parents Have Names:  I always appreciated when therapists called me by my first name, rather than “Mom.”    This may not apply to everyone (and isn’t a big deal), but it just made me feel more comfortable.

– Be realistic with expectations:  I cannot tell you the number of times I was told (by professionals) that as a rule, “preemies should be caught up to their peers developmentally by age 2.”   This served only to set up unrealistic expectations and cause frustration.  I am confident this rule does not apply to micropreemies.  My boys are 6 and are now surpassing their classmates in reading and other subjects.  But, they were absolutely not caught up developmentally until they were between 5 and 5 ½ – and this was only with consistent EI.

– Incorporate siblings when possible:  In many households, siblings are part of the child’s daily routine, and practically, it is often difficult for a parent to separate the child receiving therapy from his or her siblings during therapies (for many reasons, including separation anxiety).  Our best therapists were those who anticipated this and made the siblings part of the therapies.

– Flexibility with Schedules:  One thing I found frustrating about EI when my boys were very young was that their nap/feeding schedules changed fairly frequently.   I really appreciated therapists who were flexible with changing therapy session times.  Therapy sessions simply were useless (for the kids, at least) when they were tired or hungry.

– Timeliness:  Lastly, punctuality goes a long way in EI.   We had a problem with one therapist that was consistently late.   We were doing feeding therapy, and when she’d arrive even just 10 minutes late, my son was hungry and grumpy, and the therapy simply was no longer going to be productive.

I meet a lot of preemie parents, and I preach the importance of early intervention.   I am grateful to all of the therapists who worked with my three boys over the course of the past 6 years.  Hopefully some of these tips will leave other parents with the satisfaction and results that we have had.

** We are so grateful to Mrs. Kahn for allowing us to share her story, and she has made herself available if there are other parents of preemies and is “always happy to help give hope to other families.”  🙂  She can be reached at rarnholtkahn@hotmail.com.

Hmmmm, Where Can I Pencil You In?
Feeding the Whole Child