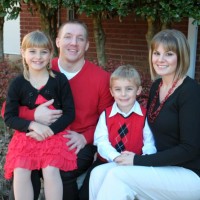 There is a scale of measurement to gauge how a child is developing.  If you don’t know this before your children are born, you quickly learn it once they arrive.  It starts minutes after birth with the APGAR test.  How quickly are they responding to outside stimuli, and are they responding in the correct ways?  Then, at every well baby visit for the next five years, you are handed a questionnaire to determine how your children are progressing.  Are they hitting their milestones?  For most parents, these tests and questionnaires are nothing more than a group of questions for them to reflect on how wonderfully perfect their child is.  And to make sure you fully understand the awesomeness of your child, your doctor will even graph it out for you and make sure you know the exact percentile in which he falls compared to other children his age.  For most parents, coming to terms with their child’s growth and development is sort of a natural flow of information and an opportunity to brag for a moment on their baby.

I understand those parents because I was one with my first child.  She was perfect and smart and hit all her milestones right on time.  I never lacked for things to make me feel like I had the world on a string where my daughter was concerned.  But having my son changed my perspective on this process.  In the beginning, the questionnaires were presented as a formality.  “Oh, it’s fine that he hasn’t done that yet, he’s got time.”  But each time I had to fill them out, it was more painful than the last, until I refused to do them all together.  We were not ready to face the idea that there could possibly be something wrong with our son.  But when he was 17 months old and still was not talking, we were ready to go as far as saying he was speech delayed.  But that was it.  That was all we could swallow at that time.  We arranged for EI to come and evaluate our situation.  When we sat before our service coordinator, she could see we were in a fragile state of denial.  We just weren’t ready for anything more than what we had already told ourselves was the problem.  In our minds, we would get some speech therapy, our son would learn to talk, and we would be on our merry way to being able to graph out how great our kid was.  No one would have to know our dirty little secret.  But over time, we had to not only peel back the layers of our son, but also of our denial.

With each therapy session, our team addressed issues of concern.  They eased us into the next steps which would address his “sensory processing disorder.”  Ok, we can get on board with this new term.  It made sense to us.  Our son was doing things that made it difficult for us to go out into the real world.  So, our team discussed the option of occupational therapy with us.  We agreed that anything that would help our family not be trapped in our house any longer was a good thing.  So, we added OT to our weekly regimen of therapy.  With a little bit of time, we began to see some results in his development.  I had gotten so used to hours of therapy every week that it started to seem normal.  It was only when I was around other children my son’s age that I would find myself breathing deeply and trying to squash my fears and thoughts of “How can this be happening?”  Our EI team knew I was afraid.  They learned how to read my reactions to our conversations.  They knew I could only take little bits at a time.  Too much would cripple me with devastating thoughts about what my child’s future would look like.  They were able to work around my anxiety and still do what needed to be done for my sweet boy to keep him and our family moving in the right direction.  So when the time came to pull back the curtain and reveal the truth, the ground work was set and we were ready.

Over time, the more people we added, the more information we received.  The more information we received, the better equipped we were to deal with the root of the problem.  It wasn’t until two years after my son aged out of the early intervention program that we sought out a specialized doctor to face the reality that we had been running from since our son was a baby.  Our son, the boy we dreamed about, the one that we had plans for, has autism.  It had come up a few times, but because we were not forced into a diagnosis before we were ready, or before it was necessary, our family was able to be a part of a team that helped us put down a solid foundation on which we have built huge pillars of success, long after our son aged out of the early intervention program.  A formal diagnosis is not always necessary, but having people that see the big picture, even when the parents can’t, is crucial – not only for the success of the child, but for the health and wellbeing of the entire family.

Our son is now six and a half, and I am so proud of all that he has overcome in his short little life.  He becomes more and more like his peers every day.  His speech and sensory dysfunction are almost unrecognizable to people who don’t know him.  He is getting ready to finish up his kindergarten year with test scores that are well above his grade level.  To say that he is amazing is selling him short.  If I were to graph his success, he would be off the charts.

From Jack of All Trades to Master Coach
Mythbusters: But Someone Told Me….

4 Responses to Off The Charts